Telesina is a rarely seen version of 5 Card Stud poker, believed to have originated in Sanremo, Italy (although some argue it was invented in the state of Tennessee, USA). Also known as “Teresina”, this Italian variant is a tricky card game that uses a stripped deck of only 32 cards rather than a full deck of 52 (known as a French deck). An uncommon game, most non-Italian players may never even have come across Telesina before. You’ll only discover Telesina at a small number of online poker rooms- after Italy regulated their online gambling market their players effectively broke away from the wider online gambling community, so fewer poker rooms have to provide Telesina to accommodate the Italian players. Although it may be slightly elusive, Telesina is perfect if you’re on the hunt for something new to add to your poker repertoire – the Italian game might just be what you’re looking for.

How do you play Telesina?

Telesina is, for the most part, played similarly to traditional 5 Card Stud or Americana Poker – with the only difference being the presence of an additional betting round in Telesina. (You can find games like 5 card stud or Americana Poker at MegawWins.com. You can also check out bitcoincasino.org for more casinos with other card game types.)

The typical hand ranks vary significantly compared to games like Texas Holdem, the most drastic change being that it becomes much easier to get a full house than a flush. The rules of Telesina dictate that ties are broken by suit: hearts are highest, followed by diamonds, clubs and then spades.

A maximum of six players can play the game. Using a deck with all of the 2,3,4,5 and 6 cards removed, in a clockwise direction each player receives from the dealer one card face down and one card up.

The game starts with all players putting a small bet known as the ante into the pot (the equivalent of the small blind in a game of Texas Hold ‘Em). The player with the best card showing brings it in with a bet and all players wishing to remain in the hand must call or raise. From this point on, the betting in the hand is pot limit, meaning a player can only bet or raise a maximum of the amount that is currently in the pot.

The betting rounds start on the player with best two-card poker hand showing, so a third card is dealt face up, and the player with the highest hand showing may check or bet. Since there are fewer than 5 cards, only pairs, triples and four of a kind can determine how high a player’s hand is, not straights, flushes or full houses. Action continues clockwise around the table with each player having the option to call, fold or raise.

The fourth round follows the same order as the previous two. The remaining players see a fourth card, also face up. Another round of betting and a fifth card is dealt face up, so players have one down card and four up.

If during the game, it is folded around to the bring-in, or a player makes a raise that goes uncalled then that player automatically wins the pot as the last man standing.

In the final round, the dealer places the ‘Vela’ card in the middle of the table. This is a community card which may be used by all players to make their best 5 card poker hand. All players remaining now have 5 cards, 1 face up and 4 face down. After the Vela card is dealt there is a round of betting after which any players remaining in the hand must show down their hand in order to claim the pot, starting with the player to the left of the dealer if it was checked around, or with the last aggressor if there was betting action.

After the final round, there follows a showdown whereby the player with the highest hand of 5 cards takes the pot – so basically the best five-card poker hand constructed by any mix of the six cards wins the game.

Q: Do any of the rules change based on the number of seated players?
A: No, the rules of the game remain the same.

Q: Can a tie ever occur in Telesina?
A: No

Q: If the ‘Vela’ card is used by both players to complete a straight flush, which player wins the pot?
A: The player whose next card of the highest suit wins the pot.

Q: Who should start the betting round if there is a tie for the highest card/hand in any betting round?
A: If two players have the same cards or hand, the order is determined by rank of suit (i.e. hearts, diamonds, clubs, spades)

Where is Telesina available to play online?

Online availability of the game is somewhat limited, as most Telesina fans are Italian and Russian (therefore, choosing to play on their own Italian poker sites, which are often restricted from international players or on Russian Poker Sites). The major online poker sites and the online casinos with the best online casino deals out there rarely facilitate Telesina for poker players, but having a thorough search online can result in a few viable options for prospective Telesina fans:

Mythos Poker has Telesina available for its online players. It is played as Telesina Pot Limit (PL). This stipulation requires that the maximum bet is equal to the current pot at the time of the bet. Mythos has a New Depositor bonus of 100% up to €1000 and an attractive loyalty scheme, Titan’s Bet.

Win Cake is a reliable and secure poker and casino site, fully regulated by the UK Gambling Commission since 2006. They provide the gaming option of Telesina to their customers, in addition to their existing games of Texas Hold’em, Omaha and Omaha Hi/Lo plus Online Dice. They offer an attractive First Depositor Bonus of 200%, up to $5,000 and run a variety of daily, nightly and weekly events to choose from. Cash prize pools on the site’s tournaments are guarnateed to hit anywhere from $50 to a massive $10,000.

Stella Poker, a slightly lesser-known poker site, also offers the option of Telesina for its players. The site has a player “on the button”, therefore they require two players to post the big and small blinds. The first blind is called the “small blind” and is usually half the minimum bet of the game, although in some games, the fraction may be slightly different. The second blind is the “big blind” and is always the same size as the game’s minimum bet. Stella Poker offers a first deposit bonus of 200% (with the maximum bonus amount new players can receive per bonus being an impressive €1000). The site offers a €1000 freeroll every Sunday which is open to all new players. 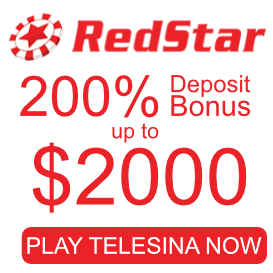